The Sovereign Hotel was a Portland, Oregon, hotel built in 1923. The nine-story building was added to the United States' National Register of Historic Places on December 2, 1981. Part of the building houses a portion of the Oregon Historical Society's Oregon History Center. 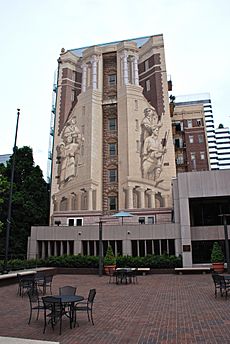 The mural Oregon History on the building's west side

The Georgian-style building was designed by Carl L. Linde, and was also once known as the Sovereign Apartments. The Sovereign Hotel became the home of KFWV radio (later known as KWJJ) by September 1926, when the station moved from 385 E. 58th Street. In March 1927, KFWV moved its studios to the Broadway Theatre building.

The hotel was purchased by Harry Mittleman in 1938. Mittleman had constructed many Portland apartment buildings in the 1930s, and he converted the Sovereign into apartments shortly after acquisition. Mittleman sold the building in 1972.

In 1982, the Oregon Historical Society (OHS) purchased the building to expand the Oregon History Center. The generally L-shaped building has six sides, and on four of the six sides are murals painted in 1989 by Richard Haas, two of which are eight stories tall. They were commissioned by OHS for $225,000. One side shows the Lewis & Clark Expedition, while the mural on the south side of the structure depicts the pioneer period in Oregon's history.

In 2014, OHS sold the building. A stipulation of the sale was that the new owner must preserve the Richard Haas murals. In early 2016, renovation of the building was under way, with completion projected for fall 2016.

All content from Kiddle encyclopedia articles (including the article images and facts) can be freely used under Attribution-ShareAlike license, unless stated otherwise. Cite this article:
Sovereign Hotel (Portland, Oregon) Facts for Kids. Kiddle Encyclopedia.