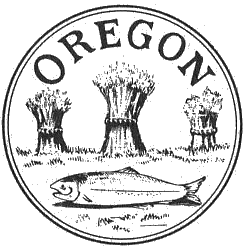 Oregon pioneer history (1806—1890) is the period in the history of Oregon Country and Oregon Territory, in the present day state of Oregon and Northwestern United States.

It was the era when pioneers and mountain men, primarily of European descent, traveled west across North America to explore and settle the lands west of the Rocky Mountains and north of California. Some also arrived via the Pacific Ocean, traveling by ship either around Cape Horn or by changing ships at Panama. The period begins after the explorations of the lower Columbia River by Robert Gray and George Vancouver in 1792, along with the 1804-1806 Lewis and Clark Expedition to Oregon Country, and runs until circa 1890 when railroads and urban centers created a more settled state.

At the beginning of the pioneer period the Oregon Country was the homeland of numerous tribes of Native Americans. Regardless, portions of the area were claimed by the United States, Great Britain, Spain, and Russia. From 1818 to the mid-19th century, several treaties were signed that would set the current political boundaries. In 1818, the United States and Great Britain signed the Treaty of 1818 that led to what has been termed a “joint occupation” of the Oregon Country. Also in 1818 the U.S. resolved its claims with Spain regarding the western Louisiana Purchase lands, limiting Spanish claims to colonial Alta California south of the 42nd degree of latitude. This was followed by the Russo-American Treaty in 1825 that removed all remaining Russian-American Company claims south of 54’ 40” (previously resolved with the British, regarding claims with Great Britain only). The remaining territorial conflict between British and U.S. claims continued until 1846 when the Oregon Treaty settled the boundary issue with the 49th degree of latitude set as the international boundary between the United States and Britain’s North American possessions. However, due to some ambiguity in the treaty, future conflict did arise and ended with the bloodless Pig War over the San Juan Islands.

Various Native American tribes inhabited the region at the beginning of the pioneer settlement period. Each tribe had their own forms of government, but no modern nation existed. The first formal government in the region came in the form of the Hudson’s Bay Company, who were granted the authority by their charter to in effect rule over the region’s British subjects. Thus the HBC was the de facto government for much of the region until U.S. settlers eventually outnumbered the British in the region.

Beginning in 1841 with the death of Ewing Young, settlers in the Willamette Valley held a series of meetings at Champoeg, Oregon. Eventually, in 1843 the majority of participants voted to create a government to rule over the pioneers until the boundary question would be settled. This temporary government had a supreme judge, a legislature, and at first an executive committee followed later by a governor. This government remained in control of portions of the region until 1849 when the United States’ territorial government arrived.

Beginning in 1849, the Oregon Territorial Legislature began meeting and passing laws, with the Provisional Government’s laws remaining in effect unless a new law was passed (except a law allowing for minting of money that was set aside by the first territorial governor). In 1857, the people of the territory passed a resolution to hold a convention to draft a constitution in order to achieve statehood. The Oregon Constitutional Convention was held in Salem during the summer of 1857, and created Oregon’s first constitution. Oregon submitted the constitution to Congress, and on February 14, 1859, Oregon became a state.

All content from Kiddle encyclopedia articles (including the article images and facts) can be freely used under Attribution-ShareAlike license, unless stated otherwise. Cite this article:
Oregon pioneer history Facts for Kids. Kiddle Encyclopedia.