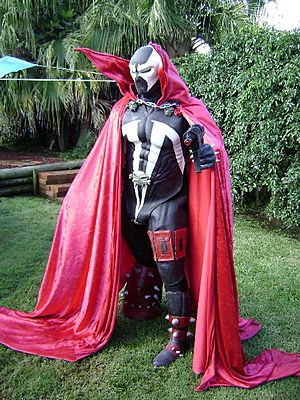 A cosplayer dressed up as Spawn.

Spawn is a fictional character, a comic book superhero published by Image Comics. He was created by Todd McFarlane. He appears as a playable guest character in both Soulcalibur II and Mortal Kombat 11.

Spawn has appeared in movies, TV series and video games; he was played by Michael Jai White in a 1997 movie. On animated shows/movies/games he is portrayed by Keith David and Kevin Michael Richardson.

All content from Kiddle encyclopedia articles (including the article images and facts) can be freely used under Attribution-ShareAlike license, unless stated otherwise. Cite this article:
Spawn (comics) Facts for Kids. Kiddle Encyclopedia.