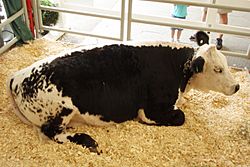 The Canadian Speckle Park is a breed of cattle native to the Canadian province of Saskatchewan. It is one of only a few beef cattle breeds developed in Canada. The latter half of the breed's name derives from the characteristic white, black and grey spots and patches of color that it is known for.

Work on breeding the Canadian Speckle Park began in the 1950s with the crossing of a roan Shorthorn heifer to a Black Angus bull. The spotting became a dominant trait in the offspring, and the beginnings of a new breed emerged. Descended solely from British beef breeds, it is naturally polled and inherits many of the characteristics of popular cattle like the Angus.

Canadian Speckle Park is a truly Canadian breed developed from three British breeds: Teeswater Shorthorn, Aberdeen Angus, and a British white. Mary Lindsay began producing speckled cattle when she crossed a red roan cow and a bull with a white park pattern. These offspring were always speckled, and in 1959, Lindsay sold a heifer to Bill and Eillen Lamont of Saskatchewan, who began using speckled cows in their herd. When crossed with Black Angus bulls, these cows produced offspring with a speckled pattern. These offspring were successful beef cattle, and the next step was to develop this handful of cattle into a recognized breed. In 1985, representatives of nine herds gathered together to form the Speckle Park Breeders Association. Created with the intent to develop a new breed, this association was later renamed The Canadian Speckle Park Association. In 1993, the association was incorporated under the Canadian Animal Pedigree Act so a breed could be developed, and in 1995 the first bylaws were passed. Finally, in 2006, Canadian Speckle Park was granted full breed status.

Canadian Speckle Park is so named because of the colour pattern of the cattle. Speckled refers to the spots on the rear quarters and across the body, and park refers to the colour around the ears, eyes, muzzle, lower legs and teats. Except for the solid colour pattern, Canadian Speckle Park have white lines on their backs and underbellies. The classic speckle pattern contains more coloured spots around the hips and shoulders, with a generally black or black roan face. White with small black spots is characteristic of the leopard pattern. Classic speckle and leopard patterns are genetically the same, and result from the combination of the white park gene and the solid gene. The pattern of white with black points shows a mostly white animal with black around the ears, eyes, muzzle, lower legs and hooves, and is produced by the dominant gene. Solid coloured offspring also exist in Canadian Speckle Park herds. Speckle Park cattle may have red speckle patterns, as the recessive red gene may be seen in both parents.

All content from Kiddle encyclopedia articles (including the article images and facts) can be freely used under Attribution-ShareAlike license, unless stated otherwise. Cite this article:
Speckle Park Facts for Kids. Kiddle Encyclopedia.