Spinball Whizzer is a spinning roller coaster located in the Adventure Land area of Alton Towers in Staffordshire, England. Built by Maurer Söhne, it was previously sponsored by Sega, the company that created the Sonic the Hedgehog video game franchise, and was known as Sonic Spinball from 2010 to 2015. 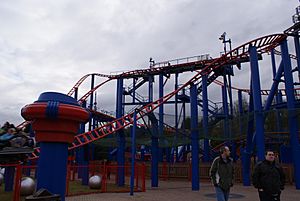 Sonic Spinball after its re-branding in 2010

Opening in 2004, Spinball Whizzer featured a loose pinball machine theme. The name was a pun on the song "Pinball Wizard" by The Who. In 2010, it was announced that Spinball Whizzer would be receiving a Sonic the Hedgehog re-brand as part of a partnership with Japanese video game company Sega. The roller coaster was therefore given a red and blue track repaint; new decoys, signage and audio, including songs from the games (with the station announcements done by Roger Craig Smith before he debuted as Sonic's voice in Sonic Free Riders. The ride re-opened to the public as Sonic Spinball on 13 February 2010 during the park's February half term event. A Sonic-themed room was also made available at the Alton Towers Hotel, which featured various playable Sonic games and wallpaper based on Sonic the Hedgehog 4: Episode I.

Sega previously had a deal with Alton Towers for the Toyland Tours dark ride. A Sonic animatronic featured in one of the ride's scenes along with associated sound effects and music. However, the ride was closed for refurbishment in June 2005 to make way for Charlie and the Chocolate Factory: The Ride, and currently the Alton Towers Dungeons. Sega's sponsorship was set to end in 2013 as part of the three-year deal. At the end of 2013, the sponsorship was renewed, and continued until 2016.

On 2 June 2015, the ride was temporarily closed, owing to an accident on The Smiler at Alton Towers. Sonic Spinball reopened on 15 June 2015. The ride returned to the Spinball Whizzer theme for the 2016 season as part of an area of the park called Adventure Land.

All content from Kiddle encyclopedia articles (including the article images and facts) can be freely used under Attribution-ShareAlike license, unless stated otherwise. Cite this article:
Spinball Whizzer Facts for Kids. Kiddle Encyclopedia.