Spiranthes romanzoffiana, commonly known as hooded lady's tresses (alternatively hooded ladies' tresses) or Irish lady's-tresses (Irish: Cùilìn Gaelach), is a species of orchid. Collected by Chamisso during the Romanzov expedition it was described by him in 1828 and named for Count Nikolay Rumyantsev who financed the expedition. This orchid is native to North America, Ireland and the British Isles. 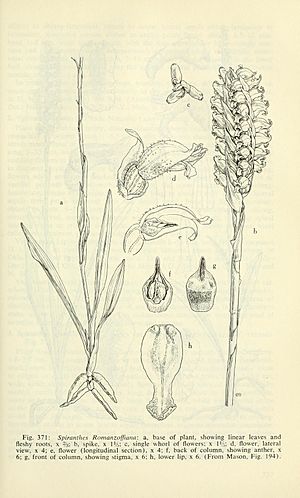 Hooded lady's tresses is a perennial plant with a fleshy rootstock. It sends up shoots with lanceolate leaves and three rows of flowers arranged in spirally twisted rows. Each scented flower has the sepals and petals united forming a lip of a tube. The labellum, or lower petal, of the flower is white with green veins.

The plant flowers in late summer. The flowers are pollinated by insects, and the tiny dust-like seed is distributed by the wind. However the plant can also reproduce vegetatively by means of root tubers which can grow new shoots while the old parts of the plant die. The orchid is associated with a mycorrhizal fungus which can provide it with essential nutrients.

Hooded ladies' tresses was first described by the German botanist Adelbert von Chamisso. He named it in honour of his patron Nikolay Rumyantsev who had financed the scientific exploration to the Americas in 1815–1818 on which he found the orchid. It is common in North America, including Canada and the United States, but also grows in a few locations in Scotland, England, and Ireland. The first Irish record was made in 1810 in County Cork. Since then it has been found in a number of other locations in Ireland and Northern Ireland, including the Lough Neagh basin and the Mourne Mountains and the hills of Antrim. It grows along lakeshores and in damp pastures. The distribution pattern, occurring on both sides of the Atlantic Ocean, is puzzling.

All content from Kiddle encyclopedia articles (including the article images and facts) can be freely used under Attribution-ShareAlike license, unless stated otherwise. Cite this article:
Spiranthes romanzoffiana Facts for Kids. Kiddle Encyclopedia.