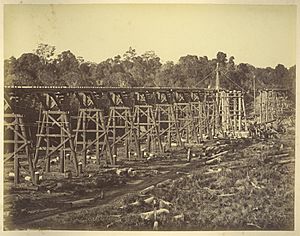 The contract for the first section of the Mount Perry railway was awarded to J. & A. Overend and Company in November 1878. Progress on the railway was delayed during 1879 by construction of the bridge over Splitters Creek. The original design required screw pile foundations, but a deep bed of boulders was encountered and cast iron caissons, later filled with concrete and brickwork, had to be sunk instead. Work was further delayed by an unsuccessful attempt by the contractors to use coffer dams to aid the sinking of the piers.

The bridge was completed in 1880 with the use of compressed air equipment obtained from the engineer for the Fitzroy River bridge. The contract was completed in February 1881 at an additional cost of £1,461 due to the difficulties experienced in building the bridge. The railway was opened for traffic between North Bundaberg and Moolboolaman on 19 July 1881.

The last operating section of the railway, from North Bundaberg to Gin Gin including the bridge, was closed to traffic on 25 January 1993.

The bridge comprises two 60-foot (18 m) plate girder spans with timber longitudinals and timber approach spans including 36-foot (11 m) spans strengthened with strut and crown, other spans by truss and tie rods. Metal girders are continuous over two spans and support cross-girders at lower flange level. These carry longitudinal timber stringers on which the rails rest.

Splitters Creek Railway Bridge was listed on the Queensland Heritage Register on 21 October 1992 having satisfied the following criteria.

A late 19th century timber trestle bridge, representative of a type once more widespread in Queensland, with riveted half-through continuous plate girder main spans which are the oldest extant of their type in Queensland.

All content from Kiddle encyclopedia articles (including the article images and facts) can be freely used under Attribution-ShareAlike license, unless stated otherwise. Cite this article:
Splitters Creek Railway Bridge Facts for Kids. Kiddle Encyclopedia.