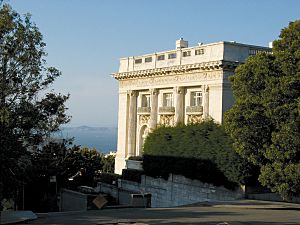 Spreckels Mansion was built c.1912–1913 and is a French Classical mansion located in the Pacific Heights neighborhood at 2080 Washington Street in San Francisco, California. The three story mansion is in a French Baroque Chateau-style, designed by George Adrian Applegarth (1876–1972) and Kenneth A. MacDonald Jr. (of MacDonald & Applegarth firm), and was built by businessman Adolph B. Spreckels. It is listed as city landmark No. 197.

Adolph B. Spreckels was the son of sugar tycoon Claus Spreckels, he had helped expand the sugar business to Hawaii and Salinas. Adolph married Alma de Bretteville on May 11, 1908, she was many years younger than him. The property for the Spreckels Mansion was bought by Adolph as a Christmas gift for his wife Alma, they had been living in Sausalito. To build the mansion they combined several prime lots, and eight Victorian homes were moved to Jackson and Washington Streets. The house was speculated to have cost around $1,000,000 to build in 1913 and took two years to complete. At the time of its build you could see six counties from the mansions circular observatory (San Mateo County, Santa Clara County, Alameda County, Contra Costa County and Marin County). There are still views of the San Francisco Bay from the mansion, and it is located across the street from Lafayette Park.

After the Spreckels Mansion was built, Alma went to Europe to stock the new house with 18th-century antiques. On this same trip Alma met with Auguste Rodin and brought 13 of his bronze sculptures to San Francisco for the 1915 Panama Pacific International Exposition, which later inspired the creation of the California Palace of the Legion of Honor. The suite for Alma de Bretteville Spreckels featured Louis XIV furniture and the suite for Adolph Spreckels featured Colonial Georgian furniture. The home reportedly features 55 rooms and a Louis XVI ballroom.

Adolph Spreckels died on June 28, 1924, and Alma inherited his empire and the mansion. Alma died in 1968, leaving the house to her two daughters. After 1968, the mansion was divided into four units. Danielle Steel purchased the property and restored it to a single family residence. Steel added a very tall hedge in front of the mansion blocking the architecture, for the sake of privacy.

All content from Kiddle encyclopedia articles (including the article images and facts) can be freely used under Attribution-ShareAlike license, unless stated otherwise. Cite this article:
Spreckels Mansion (San Francisco) Facts for Kids. Kiddle Encyclopedia.