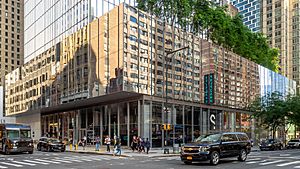 Spyscape is a private, for-profit espionage museum and experience in Midtown Manhattan, New York City. It opened in February 2018 to a positive reception from local and international media. It features seven main experience zones, as well as a James Bond exhibition, 007xSpyscape.

The 60,000-square-foot museum & experience was created by Archimedia, a London-based private investment group and developer of resorts and leisure attractions, at a cost of “tens of millions of dollars.” The "dark, labyrinthine interior" was designed by David Adjaye and occupies two levels inside a glass box building in midtown Manhattan.

The gallery themes include: Encryption, which focuses on the cryptanalysts who cracked the German Enigma machine in WWII; Deception, which takes visitors through the FBI’s hunt for KGB mole Robert Hanssen; Surveillance, a 360-degree room that presents a closer look at Edward Snowden; Hacking, an emoji-filled gallery highlighting the Anonymous (group); Cyberwarfare, which focus on Stuxnet; Special Ops, which focuses on WWII spy gadgets and SOE Officer Virginia Hall; and Intelligence, which examines the how espionage and analysis shaped the Cuban Missile Crisis.

Visitors have the opportunity to test their own skills with various ‘challenges’ throughout the galleries - assessing traits from empathy and agility, to personality, brain power, and risk tolerance. The final gallery is Debrief, where visitors receive the results of their tests and challenges, and are assigned a spy role.

Driven: 007xSpyscape - the first official James Bond exhibit in New York City - opened March 2019 in Spyscape’s south gallery. The focal point of the exhibit is the actual Aston Martin DB5 that was driven by Pierce Brosnan in the film GoldenEye. In response to the COVID-19 pandemic, Spyscape made the 007xSpyscape exhibition available for free online following the temporary closure of the NYC venue.

In April 2020, Spyscape released a podcast series, True Spies, narrated by Hayley Atwell and Vanessa Kirby. True Spies provides a unique insight into the world of espionage, asking listeners what they’d do in real life spy situations. The series also invites listeners to test their own spy skills, with exercises designed by a former Head of Training at British Intelligence.

All content from Kiddle encyclopedia articles (including the article images and facts) can be freely used under Attribution-ShareAlike license, unless stated otherwise. Cite this article:
Spyscape Facts for Kids. Kiddle Encyclopedia.