The church is an example of what the Chinese describe as a nail house; when the church refused to sell to a property developer a large shopping mall was constructed around it. 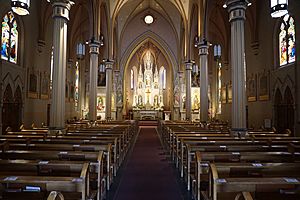 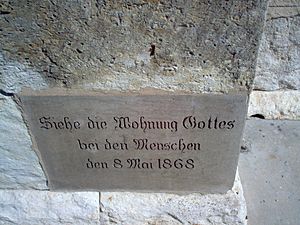 The church occupies the probable second site of the Missión San Antonio de Valero (later known as the Alamo), before it was moved in 1724 to its present location. The cornerstone of the church was laid in 1868, and it was finally completed in 1871. It served a large and growing community of German immigrants. In the 1870s, Friar Henry Pfefferkorn, founder of the Liederkranz (male singing choir), painted the Annunciation and Assumption murals on the side altars. A steeple was added in 1898. Stained glass windows, imported from the Emil Frei Art Glass Factory in Munich, Germany, were installed in 1902.

In 1944, Joske's department store (whose site would eventually become part of the Shops at Rivercenter complex) offered to buy the church grounds in order to develop it commercially. Parishioners unanimously refused the offer to move from the site and so instead Joske's built around the three sides of the church, earning the church from locals the moniker "St. Joske's". A restoration was commenced in 1981. Today, the parish serves as home to a multicultural community and as a popular attraction for tourists. Spanish-language masses are held with mariachi music and the San Antonio Liederkranz sings once a month.