Kids Encyclopedia Facts
Not to be confused with St. Louis County Library. 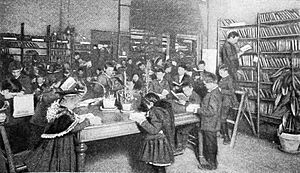 The St. Louis Public Library is a municipal public library system in the city of St. Louis, Missouri. It operates sixteen locations, including the main Central Library location.

In 1865, Ira Divoll, the superintendent of the St. Louis Public School system, created a subscription library in the public school library that would later evolve into the St. Louis Public Library. Divoll believed that a library should work in tandem with the public education system and offer citizens an opportunity for self-improvement and culture.

In 1869, Divoll’s subscription library moved to the Board of Education building. The library consisted of 4 staff members who offered reference services 12 hours a day. The library also encouraged children to visit, and had no age restrictions as did most libraries of the day.

Due to rapid growth of the collection, which grew from 1,500 volumes in 1865 to 90,000 volumes by 1893, the library required more space. In 1893, the library moved into a new space on the top floors of the new Board of Education building. Also in 1893, the citizens of St. Louis voted to move the administration of the library to an independent board, supported by a property tax. This vote enabled the library to operate without subscription fees and be open to all St. Louis residents. 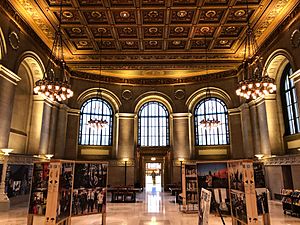 The interior of the Central Library in 2018

The Central Library building at 13th and Olive was built in 1912 on a location formerly occupied by the St. Louis Exposition and Music Hall and was designed by Cass Gilbert. The main library for the city's public library system has an oval central pavilion surrounded by four light courts. The outer facades of the free-standing building are of lightly rusticated Maine granite. The Olive Street front is disposed like a colossal arcade, with contrasting marble bas-relief panels. A projecting three-bay central block, like a pared-down triumphal arch, provides a monumental entrance. At the rear, the Central Library faces a sunken garden. The interiors feature some light-transmitting glass floors. The ceiling of the Periodicals Room is modified from Michelangelo's ceiling in the Laurentian Library. Renovation and expansion of the building began in 2010 and finished in 2012.

All content from Kiddle encyclopedia articles (including the article images and facts) can be freely used under Attribution-ShareAlike license, unless stated otherwise. Cite this article:
St. Louis Public Library Facts for Kids. Kiddle Encyclopedia.