St. Patrick's Church is located in the centre of Straffan village, 760 m (½ mile) north of the River Liffey.

St. Patrick’s Church, Straffan was built in the early 13th century. It is recorded that St Patrick's was incorporated into the Hospital of Saint John outside Newgate, Dublin c. 1250 which would suggest its construction at an earlier time.

The vicarage was suppressed in 1397 and was united with Saint John’s Hospital. In 1531 Archbishop John Alen restored the vicarage.

The church may have served as a safe house for persecuted clergy.

The church was replaced by the modern church in 1838.

The church is located within a modern graveyard, accessible by a lychgate, built c. 1920. 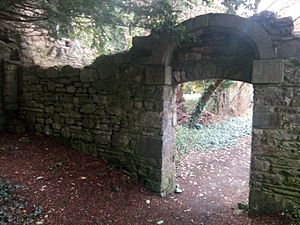 Arched doorway in the east wall

St. Patrick's Church has a fortified tower house of four storeys attached to its west end, with a bell-cote on top.

The entrance door is to the south, where there are two Gothic windows.

Most of the northern wall has fallen.

All content from Kiddle encyclopedia articles (including the article images and facts) can be freely used under Attribution-ShareAlike license, unless stated otherwise. Cite this article:
St. Patrick's Church, Straffan Facts for Kids. Kiddle Encyclopedia.