The Anglican Parish of St Paul was established at a time when the population of Vancouver was rapidly expanding. In response to a demand from a small group of St James' parishioners, a vacant lot was purchased and a daughter church was built in 1889. The parish was established in 1891. The church was located at the centre of the geographically-defined parish, but in 1898 it was placed on skids and moved north-west, away from railway yards in Yaletown and closer to where most parishioners lived in the West End. In 1905, it was replaced by a larger church, and the old church became the parish hall.

The new church was built in Gothic revival style with pointed-arch windows and doors, following the traditional lines of an English parish church, something that would have been familiar to most of the parishioners at the time, or to their parents.

The church had eighteen windows (not including clerestory windows), all except three glazed with leaded lights. Stained glass was fitted in windows in the east wall (portraying St Paul preaching in Athens), the west wall (St Peter with Dorcas doing good works), and the north transept (Faith, Hope and Charity). Between 1952 and 1964, nine more windows were fitted with stained glass, all in some way portraying Christ. Until 1952, the only portrayal of Christ in the church had been a print showing Jesus as a small boy.

The church pipe organ, Opus 264 by Casavant Frères of Québec, is said to be the first to be constructed west of the Rockies.

The old church was replaced by a new parish hall and a rectory in 1911. In 1929, the rectory was re-located to allow the hall to be extended. By then, the site at the corner of Jervis Street and Pendrell Street had assumed its present configuration, except for a wheelchair ramp added in 2002.

Mortgage costs associated with extending the parish hall were exacerbated by the mid-thirties depression. Optimism, and finances, revived after the Second World War and the mortgage was ceremoniously burned in 1945. 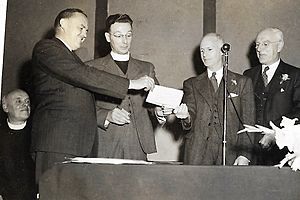 Godfrey Gower (centre) and parish officials burn the mortgage on the parish hall, 1945

During the 1960s a plan to build a car park was frustrated by the City of Vancouver. Instead, the parish built, and in 1973 opened, The Pendrellis, a high-rise apartment building for accommodating seniors at subsidised rents. The initiative had unforeseen consequences. Some thirty-five years later, when the cost of the project had been finally covered by revenues, continuing revenues from The Pendrellis enabled St Paul's to fund the community ministries which it had developed in the meantime.

From its founding, the parish thrived by serving a large and relatively prosperous middle-class membership. The parish followed a traditional Anglican Sunday liturgical pattern of Holy Communion, Morning Prayer and Evensong, and sponsored well-supported educational and social activities like Sunday Schools, Ladies’ and Men's Guilds, scouts and guides and youth groups.

All content from Kiddle encyclopedia articles (including the article images and facts) can be freely used under Attribution-ShareAlike license, unless stated otherwise. Cite this article:
St. Paul's Anglican Church, Vancouver Facts for Kids. Kiddle Encyclopedia.