St. Peters United Evangelical Lutheran Church is a former Lutheran Church located in rural Clayton County, Iowa, United States. The church was a part of a village by the name of Ceres. The church building was listed on the National Register of Historic Places in 1976. The property is also known as the Pioneer Rock Church. 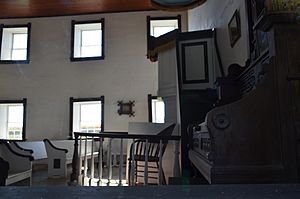 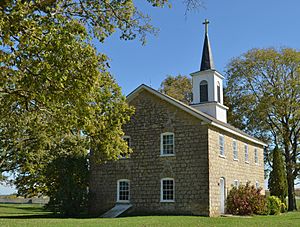 Rear of the church.

The village of Ceres was initially called Independence. The Lutherans in the area traveled to Garnavillo, Iowa for services where the Rev. Paul Stockfeld was the pastor. Stockfeld, who was also a teacher and doctor, was called to help organize the church at Independence. The members who organized the new church with Rev. Stockfeld included G.H. Bierbaum; Chris Bierbaum; Casper, Henry and Carl Backhaus; H. Wiegman, J.H. Abker and Gerhard Walke. They initially met in February 1858 and elected J.H. Abker the president and Stockfeld as the secretary.

The altar was designed by Mr. Prior of Guttenberg, Iowa for $68. Casper, Henry and Carl Backhaus built the pews and were paid $2.50 for each pew. The altar and pews were painted white with the trim in walnut.

The Rev. Gamelin became pastor at both the Pioneer Rock Church and in Garnavillo in 1894. Services at that time were held every two weeks in the church. The last resident pastor, the Rev. John Bunge, served from 1901-1907. The last two pastors, the Rev. Mall, and the Rev. Bosholm, resided in Garnavillo. In 1927 an association was formed to take care of the church and cemetery as a memorial to those who built it.

All content from Kiddle encyclopedia articles (including the article images and facts) can be freely used under Attribution-ShareAlike license, unless stated otherwise. Cite this article:
St. Peters United Evangelical Lutheran Church Facts for Kids. Kiddle Encyclopedia.