St. Thomas' Parish is an Episcopal church in Washington, D.C.. It is part of the Diocese of Washington. 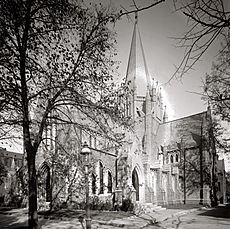 Calvary Parish was formed in 1891 to serve the Dupont Circle area of Washington with the Rev. John Abel Aspinwall as its first rector. The Rev. Aspinswall was the son of William H. Aspinwall, who built the Panama Railroad across Panama. In 1894, the cornerstone of the new St. Thomas' Parish church building was laid. The first service took place on June 25, 1899.

Over the years, numerous well-known social and political figures worshiped at St. Thomas' Parish, including Franklin D. Roosevelt, Harry Truman, and Mrs. Woodrow Wilson. On the first Sunday in Lent, 1933, parishioners welcomed the return of Roosevelt who the day before had been inaugurated as President of the United States.

Over the next few decades, many of the city's white residents left the city for the surrounding suburbs, and as a result St. Thomas' Parish, like many urban churches in the District of Columbia, lost quite a few members. The social upheaval of the 1960s left its imprint on Dupont Circle, as the neighborhood attracted more artists, hippies and others who were less in the mainstream of Washington society than had been the case in generations past.

In 1970, the original Gothic church structure was destroyed by fire as a result of arson. The vestry voted to remain in the same location and carry on an active ministry within the community. The Parish Hall, which was left standing behind the footprint of the old church, was also transformed into the simple, nontraditional worship space parishioners use today. The rest of the building became a center for community meetings and various recovery groups. St. Thomas' leaders later decided to convert the area where the old church building stood into a park that could be enjoyed by the whole neighborhood. 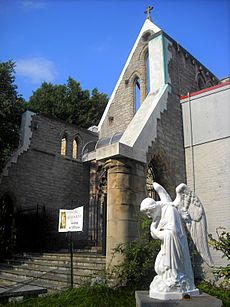 Remains of the original sanctuary

St. Thomas' has long considered itself "an inclusive and welcoming congregation." It played a supportive role in the movements for civil rights for blacks and women as far back as the early 1960s, and later for gays and lesbians. During the 1970s, St. Thomas' was one of the few churches that welcomed IntegrityUSA, the organization of gay Episcopalians who did not feel welcome in their own parishes, to celebrate Holy Eucharist in its worship space. As a result, the parish became the spiritual base for a number of gay and lesbian Episcopalians. St. Thomas' also distinguished itself as a place for memorial services and funerals for people who died from AIDS, whether or not the person had been a member of the parish.

In 1992 St. Thomas' called as its senior minister, or Rector, the Rev. James Holmes, an openly gay priest in a committed relationship with his partner of more than 15 years. Then in 1998, St. Thomas' developed one of the earliest liturgies in the Episcopal Church for the blessing of same-sex unions.

After Rev. Holmes retired in 2002, the parish was served for the next two years by an interim rector, the Rev. Elizabeth Carl. Rev. Carl was the first woman openly living in a lesbian relationship to be ordained by the Episcopal Church in June 1991.

In December 2004, The Rev. Dr. Nancy Lee Jose was called to be St. Thomas' eighth rector, and the first woman to hold that position. Jose retired the summer of 2016. In October 2016, the Rev. Alex Dyer became the Priest in Charge.

The Rt. Rev. Gene Robinson, ninth bishop of the Episcopal Diocese of New Hampshire, has long been a friend and supporter of the ministries of St. Thomas' Parish. Following his election as the first openly gay bishop in the Anglican Communion, Bishop Robinson visited St. Thomas' to talk about his personal experiences and his perspectives on the leadership of gay and lesbian persons in the church.

Today, St. Thomas' is transforming once again to reflect the diversity of the Dupont Circle neighborhood. Young, single and married persons—both straight and LGBT—make up a growing percentage of the population, and as a result more infants, children and youth have become members of the congregation. The parish provides opportunities for education and spiritual formation for all parishioners, including Sunday activities before and after worship, events throughout the week, and special seasonal programs.

All content from Kiddle encyclopedia articles (including the article images and facts) can be freely used under Attribution-ShareAlike license, unless stated otherwise. Cite this article:
St. Thomas' Parish (Washington, D.C.) Facts for Kids. Kiddle Encyclopedia.