St Bartholomew's Church, Edgbaston, also known as Edgbaston Old Church, is a parish church in the Church of England in Edgbaston, Birmingham.

The Grade II listed church is medieval, but was largely rebuilt in the 19th century. The chancel, chapels and north arcade were added in 1885 by J. A. Chatwin, who is buried in the churchyard. His grave monument, along with those of William Hoddinott, Jane Bellis and Catherine Chavasse is Grade II listed.

A memorial to physician and botanist Dr. William Withering, who pioneered the medical use of digitalis (derived from the foxglove), is situated on the south wall of the Lady Chapel, and features carvings of foxgloves and Witheringia solanaceae, a plant named in his honour.

The tower contains a ring of eight bells, with a tenor weight of 10 long cwt 14 lb (1,134 lb or 514 kg). The earliest four date from 1685. The bells are rung by the Birmingham University Society of Change Ringers during term time. 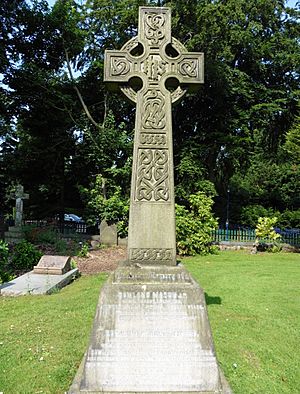 Also in the churchyard is the war grave of a Loyal Regiment officer, Lieutenant Rowland Charles Mason, of World War I.

All content from Kiddle encyclopedia articles (including the article images and facts) can be freely used under Attribution-ShareAlike license, unless stated otherwise. Cite this article:
St Bartholomew's Church, Edgbaston Facts for Kids. Kiddle Encyclopedia.