The Church of St Cadoc, is the parish church of Llangattock Lingoed, Monmouthshire, Wales and sits in the centre of the village. It is in the Perpendicular style and is a Grade I listed building as of 1 September 1956.

The church is medieval, of Old Red Sandstone with a stone tiled roof. The nave is quite long, ending in a battlemented tower and turret. The church was extensively restored in the nineteenth century, including work undertaken by John Prichard, following the collapse of the south wall. 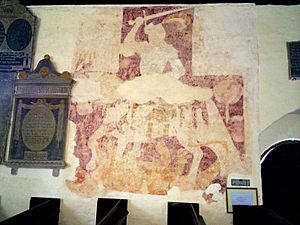 The church is dedicated to the Welsh Saint Cadoc.

The interior includes a large wall painting of the early fifteenth century depicting St George slaying the dragon. The Royal Commission on the Ancient and Historical Monuments of Wales describes a possible interpretation of the painting as being a reference to the defeat of Owain Glyndŵr by the English at the battles of Campston Hill (1404) and Grosmont (1405), which were fought near to Llangattock Lingoed.

There also remain some sixteenth century pews, which John Newman, the architectural historian, describes as "a rare survival." A timber beam with carved vine leaves and grapes is the remaining part of a late C15th rood screen. The medieval cross in the churchyard has its own Grade II listing.

All content from Kiddle encyclopedia articles (including the article images and facts) can be freely used under Attribution-ShareAlike license, unless stated otherwise. Cite this article:
St Cadoc's Church, Llangattock Lingoed Facts for Kids. Kiddle Encyclopedia.