St David's Church, Shenley Green is a parish church of the Church of England located in Shenley Green, Birmingham.

It was designed by the architects of the Bournville Village Trust under the direction of Selby Clewer.

Part of the parish was taken from that of St Gabriel's Church, Weoley Castle.

The church is dominated by its large lantern tower which not only illuminates the interior but also acts as a local landmark. The distinctive green copper roof was replaced with stainless steel in 2011-2012 after a number of thefts of copper sheeting.

The consecration stone, and dedication stones were brought from St David's Cathedral by the local scout troop in a handcart.

The church contains a pipe organ dating from 1970 by Bowen of Northampton. It was enlarged in 1999 by Trevor Tipple of Worcester. A specification of the organ can be found on the National Pipe Organ Register. 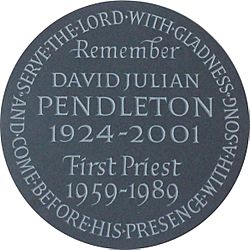 All content from Kiddle encyclopedia articles (including the article images and facts) can be freely used under Attribution-ShareAlike license, unless stated otherwise. Cite this article:
St David's Church, Shenley Green Facts for Kids. Kiddle Encyclopedia.