St. Gabriel's Church, Weoley Castle is a parish church in the Church of England located in Weoley Castle, Birmingham. 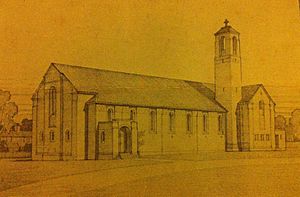 The church as designed by the architect, taken from the Parish Messenger, July 1937

Neville Chamberlain, at the time Chancellor of the Exchequer, laid the foundation stone for the new church on 10 December 1933. It was consecrated by the Bishop of Birmingham E. W. Barnes on 30 June 1934.

The church is by the architect Edwin Francis Reynolds. The original plans included a chancel, transepts and tower, which have not yet been completed. The parish was assigned out of St. Laurence's Church, Northfield and St. Mary's Church, Selly Oak in 1933.

The calvary was sent in 1948 by Ernest William Barnes, Bishop of Birmingham from St John's Church, Deritend and was that parish's memorial of the First World War.

Part of the parish was later transferred to St. David's Church, Shenley Green.

The church has an historic organ dating from 1777 by John Snetzler which was originally located in St. James' Church, Wednesbury and then St. Andrew's Church, West Bromwich. It was moved here in 1940. A specification of the organ can be found on the National Pipe Organ Register.

All content from Kiddle encyclopedia articles (including the article images and facts) can be freely used under Attribution-ShareAlike license, unless stated otherwise. Cite this article:
St Gabriel's Church, Weoley Castle Facts for Kids. Kiddle Encyclopedia.