St Eanswith's Church is a Grade II* listed Anglican church in the village of Brenzett, Kent, about 7 miles (11 km) north-east of Rye, East Sussex. A church was originally built on this site in the 7th century; the present building dates from the 12th century and has later modifications.

The church is dedicated to Saint Eanswith; she was an Anglo-Saxon princess, a granddaughter of king Æthelberht of Kent (who was converted to Christianity by Augustine of Canterbury), and daughter of king Eadbald of Kent who reigned from 616 to 640. She was born about 630, and it is believed that she was the abbess of a nunnery at Folkestone. 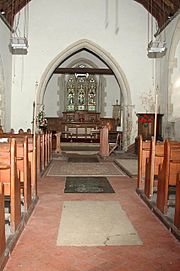 The oldest parts of the church, the nave and chancel, date from the 12th century, when the original Saxon church was replaced. There were extensions in subsequent years: the north chapel and north aisle was built in the 13th century; the nave was extended to the west in the 14th century.

A small spire, which has wood shingles, was built in the 14th century; to support it, a wooden frame was built, and buttresses built outside. 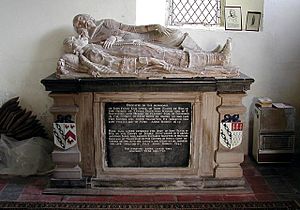 Tomb chest of John Fagge (died 1639) and his son, in the north chapel

There was some restoration of the church in the 19th century, and the east window by Lavers, Barraud and Westlake was installed in 1874. The chancel was largely rebuilt in 1902.

All content from Kiddle encyclopedia articles (including the article images and facts) can be freely used under Attribution-ShareAlike license, unless stated otherwise. Cite this article:
St Eanswith's Church, Brenzett Facts for Kids. Kiddle Encyclopedia.