The church has had a long association with Holme Pierrepont Hall.

The medieval church was largely re-built in 1666 by Henry Pierrepont, 1st Marquess of Dorchester. In 1878 Thomas Chambers Hine added the chancel.

It is now part of the combined parish of All Hallow's Church, Lady Bay. 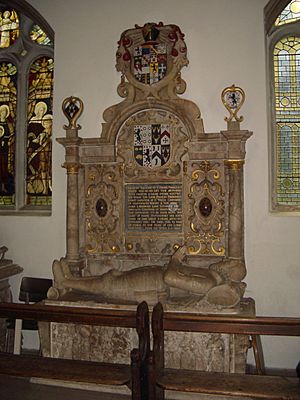 The east window of 1913 is by James Powell and Sons.

The organ was built by Charles Lloyd (organ builder) and won a gold medal at the Birmingham Trades Exhibition in 1865.

All content from Kiddle encyclopedia articles (including the article images and facts) can be freely used under Attribution-ShareAlike license, unless stated otherwise. Cite this article:
St Edmund's Church, Holme Pierrepont Facts for Kids. Kiddle Encyclopedia.