St George's Church is a Roman Catholic Parish church in Worcester. It was founded in 1829 and was administered by the Society of Jesus until 1990 when it was handed over to the Archdiocese of Birmingham. It is in the Baroque style, is a Grade II* listed building and was where Edward Elgar was organist from 1885. 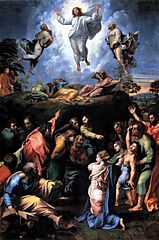 Raphael's Transfiguration, a copy hangs behind the altar

There was another, earlier, church built on the same site in 1729, but little is known about it. From 1623, for their own administrative purposes the Jesuits divided the country into 'residences' and St George's church was named after the 'residence' that covered Warwickshire and Worcestershire, St George's.

The church was opened on 16 July 1829 by, the Vicar Apostolic of the Midland District, Bishop Thomas Walsh and was designed by Henry Rowe.

Later that century, in 1880 the church was extended and the facade was heightened seven years later, to the designs of S. J. Nicoll, who also designed the interior of the Jesuit staffed Church of Saint Francis Xavier in Liverpool.

Behind the altar is a large-scale copy of Raphael's Transfiguration. The original is significant to the city of Worcester because it was commissioned by Cardinal Giulio de' Medici in 1517. Cardinal Medici went on become the titular Bishop of Worcester from 1520 to 1522 and was elected as Pope Clement VII in 1523. The copy was presented to the church in 1837 by The 16th Earl of Shrewsbury.

The organ was installed in 1885, the same year that the English composer Edward Elgar became the church organist. He succeeded his father at the age of 27, being assistant organist from the age of 15. He was organist at the church for four further years. The organ was rebuilt in 1970 by Nicholson & Co (Worcester) Ltd, and the stops that were from the old organ were marked 'E' to indicate what Elgar used when he played it. 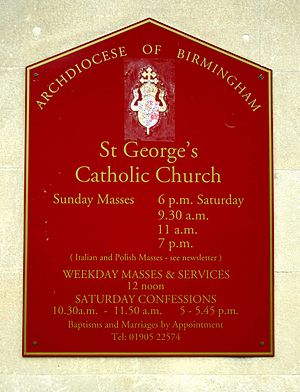 All content from Kiddle encyclopedia articles (including the article images and facts) can be freely used under Attribution-ShareAlike license, unless stated otherwise. Cite this article:
St George's Church, Worcester Facts for Kids. Kiddle Encyclopedia.