St James Church, Muswell Hill, is a large Anglican church in London, known as "the Church on the Hill".

The building was gutted by World War II bombing, and the restored church was rededicated in 1952. The church centre's foundation stone was laid on 20 May 1994 and can be viewed in the bookshop.

The Church spire was completed in 1910; the site of the church itself is at over 300 feet above sea level. With its tall tower and spire, the church stands at 179 feet tall.

A church primary school was completed nearby in 1850; its later replacement is sited on Woodside Ave. 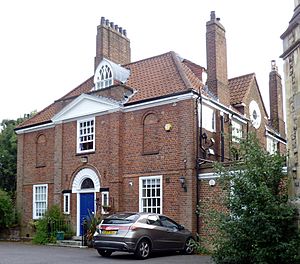 The grade II listed vicarage to the rear of the church

All content from Kiddle encyclopedia articles (including the article images and facts) can be freely used under Attribution-ShareAlike license, unless stated otherwise. Cite this article:
St James' Church, Muswell Hill Facts for Kids. Kiddle Encyclopedia.