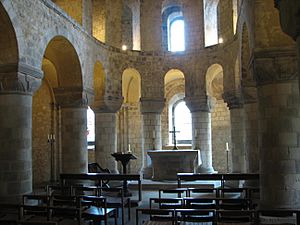 Norman chapel inside the White Tower

St. John's Chapel is located in the Tower of London. The building dates from 1080.

A Romanesque chapel, St. John's is on the second floor of the White Tower, which was built in 1077–97 as a keep or citadel, the oldest part of William the Conqueror's powerful fortress. It was constructed from stone imported from France, and has a tunnel-vaulted nave with an east apse and groin-vaulted aisles, and the gallery above curves around the apse. Thick, round piers support unmoulded arches, notable for their simplicity, with simple carvings of scallop and leaf designs providing the only decoration.

The chapel has survived complete from the early Norman period, whereas other Norman churches in England date from the mid-12th century. Because St Peter ad Vincula is the parish church of the Tower of London, St. John's Chapel is often overlooked.

Services are held in the chapel periodically during the year.

All content from Kiddle encyclopedia articles (including the article images and facts) can be freely used under Attribution-ShareAlike license, unless stated otherwise. Cite this article:
St John's Chapel, London Facts for Kids. Kiddle Encyclopedia.