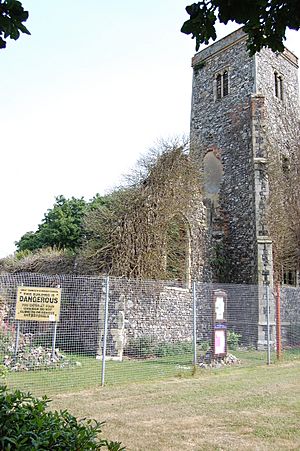 St Margaret's Church is the parish church of Hopton-on-Sea in the English county of Norfolk. It is dedicated to St Margaret of Antioch. St Margaret is also the dedication of the former church, which was destroyed by fire in 1865. The ruins of the former church remain standing, and are still consecrated. Both the old and new churches are Grade II* listed. Until 1974, Hopton-on-Sea was called Hopton (although the former railway station had changed its name in 1932); the formal name for the benefice remains Hopton. The church is in the Diocese of Norwich, and is within the deanery of Lothingland and archdeaconry of Norfolk.

The old church (52°32′20″N 1°43′47″E﻿ / ﻿52.5388°N 1.7297°E﻿ / 52.5388; 1.7297﻿ (Old St Margaret's Church, Hopton)) had a simple Early English nave, and a square west tower. The architecture of the church suggests it was built between 1189 and 1250. The north aisle (to both nave and chancel) was built later, around 1350, with Decorated windows. By tradition, the north aisle was built from stone salvaged from St Mary's, Newton when it collapsed into the sea. The list entry describes the church as being late 13th-century and 14th-century, built from flint with ashlar dressings and some brick, and that there is a 2-light Perpendicular west window. Before the fire, there was a 3-light Early English chancel window, and a Decorated east window in the north aisle. There was a pipe organ, which appears to have been by George Holdich and a recent introduction before the fire. The roof of the church was thatched.

There was a stove in the church for heating. After morning service on Sunday 8 January 1865 it was allowed to remain alight. It over-heated and caught fire. The thatched roof provided combustion, and the church was unable to be saved, although the registers were rescued from the flames.

The church lay in ruins, and was rebuilt elsewhere in the village. For many years the ruins were covered in ivy. However, the churchyard was not closed to burials until 1966. For the purposes of burials, a small room was maintained at the base of the tower. This room and the font were still in place in the 1950s. The ruins deteriorated significantly between the 1950s and 1980s. Hopton Parish Council purchased the ruins from the Church Commissioners in 2008 for £1. A slow-moving restoration project came to fruition in 2017, with the ruins being reopened to the public and enabling them to be removed from the Buildings at Risk Register. The ruins were the subject of an arson attack in 2019.

The new church was designed by the eminent ecclesiastical architect Samuel Sanders Teulon, and is his most prominent work in Norfolk. It is built of flint and chert with Lincolnshire limestone and bath stone dressings, in an Early English style. Two lancets in the west wall are separated by a stepped buttress and lead up to a sexfoiled roundel. There is a massive square crossing tower, typical of Teulon, rising from lean-to transepts, with another typical Teulon feature, a circular stair turret rising on the south-east corner and terminating in a high conical roof.

The windows are later introductions. Made by William Morris and Company, to designs by Edward Burne-Jones, they date, in the chancel, from 1881, and in the east window, from 1901. The chancel windows depict humility and faith, and hope and charity; the east window depicts the Resurrection. The south transept has been converted to a Julian chapel; it has modern stained glass by the 20th-century artist Paul Quail. A stained glass window commemorating Sir James Plumridge (buried in the old churchyard) was installed in the west wall of the new church, but is no longer extant.

There is a war memorial in the churchyard, of a crucifix on a narrow octagonal stone column, with an image of the Virgin and child on the rear.

A united benefice was created in 1980, of St Margarets and St Bartholomew's, Corton.

The vicarage was located on Warren Road. In the 1980s, the wife of the then Vicar, Sandra Chapman, hosted bed and breakfast at the vicarage. By the 1990s the vicarage had been sold, and had become the Old Vicarage Nursing Home. The nursing home closed in 2014, following a series of highly critical reports by the CQC. Unprotected by listing, the Georgian vicarage was demolished in 2015, and has been replaced by static holiday vans.

The first incumbent was a monk, whose name is not recorded, appointed in 1090, in the reign of William Rufus. After that, the next recorded incumbent is not until 1308.

There is then a long gap in records; the next recorded incumbent is after the Reformation.

Vicars of the United Benefice of Hopton with Corton

There is presently an interregnum.

All content from Kiddle encyclopedia articles (including the article images and facts) can be freely used under Attribution-ShareAlike license, unless stated otherwise. Cite this article:
St Margaret's Church, Hopton Facts for Kids. Kiddle Encyclopedia.