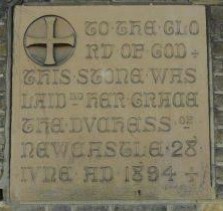 The foundation stone of the church.

St Martin's Church is a Church of England church on Boundary Road in Plaistow, Newham, east London. It was built in 1894 as a mission church, with the foundation stone laid on 28 June that year by Henrietta Pelham-Clinton (née Hope), Dowager Duchess of Newcastle and widow of the 6th Duke of Newcastle - she was a major benefactress in the area and also funded the opening of St Thomas' Roman Catholic Church in Woodford the following year.

Until 1997 its parish hall was in timber, with a World War Two bomb shelter attached - that year the firm Cottrell and Vermeulen refurbished the hall and added a community building and housing. With the three churches of St Mary's Church, Plaistow, St Matthias’ Church, Canning Town and St Philip and St James’ Church, Plaistow, it formed part of the Parish of the Divine Compassion until 19 October 2017.

From October 2017, the Divine Compassion parish was divided into three: St Philip's and St James and St Mary's was one parish. St Matthias became a second parish, and St Martin's became a separate parish for the first time in many decades.

There followed two years of interim ministry under the Rev Canon Ann Easter, and on 2 May 2019 Rev Canon Jeanette Meadway was collated, inducted and installed as Vicar of St Martin's.

All content from Kiddle encyclopedia articles (including the article images and facts) can be freely used under Attribution-ShareAlike license, unless stated otherwise. Cite this article:
St Martin's Church, Plaistow Facts for Kids. Kiddle Encyclopedia.