St Mary's Church, Thirsk is a Church of England parish church in Thirsk, North Yorkshire. The church is a grade I listed building.

The church dates from the 15th century.

In 1857 the porch on the south side was rebuilt.

It was restored in 1877 by George Edmund Street. During the restoration of 1877 it was reported that the East window of the south aisle contained the royal arms of England quartered with France, with the motto “Dieu et mon droit.” There were also the arms of the Ascough family, those of Mowbray, of Sir James Strangways, and Elizabeth his wife, and members of their family. 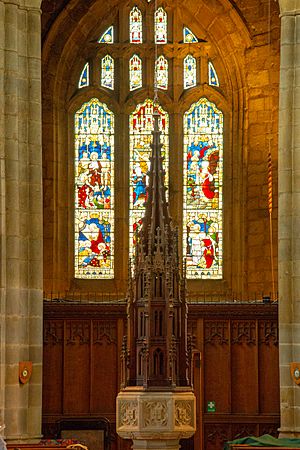 Stained glass window at the back of St. Mary's church, Thirsk

In November 2016, the church was covered with handmade poppies as part of the Remembrance Day celebrations in Thirsk. The Thirsk Yarnbombers created a more than 40,000 knitted or crocheted poppies to decorate the town, with the main display consisting of a "river" of poppies flowing from the top of St Mary's Church, down the side and then across the wall of the church's cemetery.

Best known as the renowned author James Herriot, "Alf" Wight married Joan Anderson (who appears as Helen in the Herriot books, movies and TV series) at St Marys on 5 November 1941. 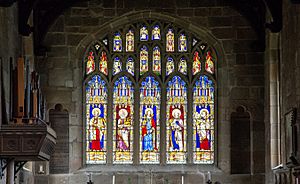 Stained glass above the altar

St Mary's is one of four churches of the Benefice of Thirsk. The others are:

A pipe organ was built in 1813 by Andrew Wood. It has been subsequently restored and enlarged. A specification of the organ can be found on the National Pipe Organ Register.

All content from Kiddle encyclopedia articles (including the article images and facts) can be freely used under Attribution-ShareAlike license, unless stated otherwise. Cite this article:
St Mary's Church, Thirsk Facts for Kids. Kiddle Encyclopedia.