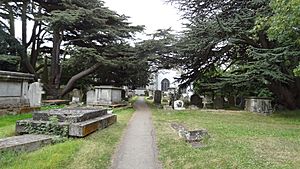 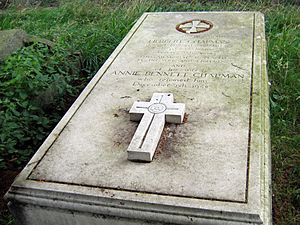 A church may have existed on the site as early as the ninth century, and there is an eleventh-century font still in use in the existing building. Parts of it date back to the thirteenth century, but there were successive alterations until it was extended in 1914-15. It has a memorial to Stamford Raffles, the founder of Singapore.

The churchyard is well maintained, and it has many tombs and memorials in the grass, which is kept long in parts. There are fine cedar and yew trees. A line of headstones on either side of the path lead to the church door, and they form part of the best collection of eighteenth century headstones in London. Burials go back seven to eight hundred years, and as a result the soil contains fragments of bone. Part of it is gravelled, which is unusual in Christian graveyards. It is still open for cremation burials.

According to a history of Hendon published in 1890, the earliest surviving grave is that of Thomas Marsh dated 1624. Fine monuments include the grave of the engraver Abraham Raimbach, the physician James Parsons and Emily Patmore, the wife of poet Coventry Patmore. Edward Longmore, a famous 7 foot 6 inch giant, was buried there in 1777, but his body was stolen by grave robbers. A twentieth century grave (pictured right) is of Herbert Chapman, the pre-war manager of Arsenal Football Club.

There are twenty Commonwealth service personnel buried in the churchyard, eleven from World War I and nine from World War II, most of whose graves could not be located so are commemorated by special memorial.

There is access to the churchyard from Church End and Church Terrace.

All content from Kiddle encyclopedia articles (including the article images and facts) can be freely used under Attribution-ShareAlike license, unless stated otherwise. Cite this article:
St Mary's Churchyard, Hendon Facts for Kids. Kiddle Encyclopedia.