A church has been located on this site as early as the 11th century when the Normans built a small, rectangular chapel. It is not known if this was the result of a rebuild of a previous church. A church on this site has been recorded in documents since 1213. The current St Nicolas's Church dates from the early 13th century, and the spire was constructed between 1446 and 1475. The Norman building was demolished in the 14th century when a new nave, both aisles and the chancel arch were constructed. In the 17th century, almost the whole of the south aisle was re-built, the chancel was re-roofed and the low pitched roof that covered the nave from the 15th century was replaced by a much steeper version. Both north aisle and south aisle were given four separate, high pitched roofs set side by side. A parish was assigned to the church in 1846.

The church was restored in 1863 by Ewan Christian and again in 1871 by W. J. Hopkins. It is a Grade I listed building.

In 1898 the church started a mission in Cotteridge which later became St Agnes' Church, Cotteridge.

The Revd W. V. Awdry, author of The Railway Series including Thomas the Tank Engine was a curate from 1940 to 1946. The church stands next to the historic buildings of Saracen's Head, recently restored and named Saint Nicolas Place.

The churchyard, which has been extended to the west and (across a private road) to the north, contains war graves of eleven service personnel of World War I and seven of World War II.

There is a poem "The New Bell Wake" about these bells. 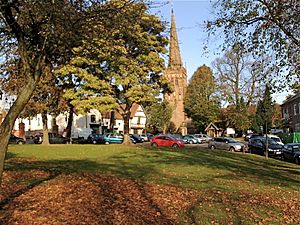 The church from across Kings Norton Green 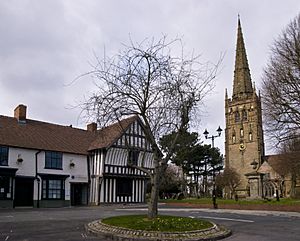 The Saracen's Head, now Saint Nicolas Place, and the church

Parts of the organ date from 1857 by J. Halmshaw, but it has been expanded and restored several times since. A specification of the organ can be found on the National Pipe Organ Register.

All content from Kiddle encyclopedia articles (including the article images and facts) can be freely used under Attribution-ShareAlike license, unless stated otherwise. Cite this article:
St Nicolas Church, Kings Norton Facts for Kids. Kiddle Encyclopedia.