St Paul's Church in Cashel Street, Christchurch, was a Category I heritage building registered by the New Zealand Historic Places Trust. It was demolished after the February 2011 Christchurch earthquake. 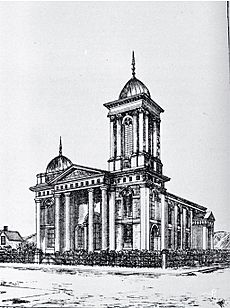 St Paul's Presbyterian Church in 1885, with its high tower that was lowered in 1962

St Paul's was built in 1877 as a Presbyterian church on the corner of Cashel and Madras Streets in the Christchurch Central City. It replaced an earlier church on the corner of Lichfield and Madras Streets built by a breakaway congregation from St Andrew's Church. Both church buildings were designed by Samuel Farr. In 1969, St Paul's merged with the Trinity-Pacific Congregational Church taking on a new name - St Pauls Trinity Pacific Presbyterian Church. Rev. Leonard Jones and Kenape Faletoese lead the new multicultural church under its new format. The Palangi membership of the church declined over the next three decades and by the time of its destruction in the February 2011 earthquake, the church membership was mostly of Samoan heritage.

On 5 August 2009, the church was the victim of an arson attack that caused considerable damage. The building was restored, but suffered damage in the 2010 Canterbury earthquake, and partially collapsed in the February 2011 Christchurch earthquake. By June 2011, the church had been demolished.

All content from Kiddle encyclopedia articles (including the article images and facts) can be freely used under Attribution-ShareAlike license, unless stated otherwise. Cite this article:
St Paul's Church, Christchurch Facts for Kids. Kiddle Encyclopedia.