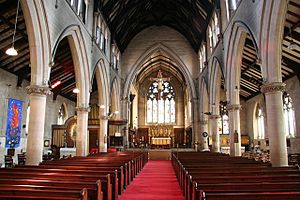 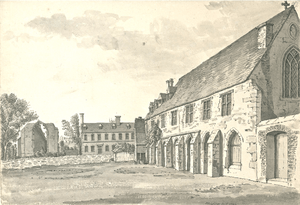 The ruins of the original St Swithin's Church and the Greyfriars, Lincoln c.1784

The original church of St Swithin, was near the Sheep Market. It suffered a bad fire in 1644 during the English Civil War. It was rebuilt in stone in 1801. This was replaced with a new building on Sheep Square. The foundation stone was laid on Easter Day 1869 by the Bishop of Lincoln, Christopher Wordsworth.

The church was built to designs of the architect, James Fowler of Louth and financed by Alfred Shuttleworth, a Lincoln industrialist. The nave and aisles were built between 1869 and 1871, the chancel was completed in 1879, and the construction of the tower and spire took place between 1884 and 1887.

Nikolaus Pevsner described the church as "without doubt his (James Fowler's) most important church."

During the construction a Roman altar was discovered.

The church contains a west window which was made by A L Moore & Co.

In October 2014, St Swithin's Church was relaunched, at the invitation of the Bishop of Lincoln, by a planting team from Holy Trinity Brompton (HTB) in the Diocese of London led by Revd Jim Prestwood.

The church building is currently closed. The church currently meets online at 10.30am and 6.30pm each week. 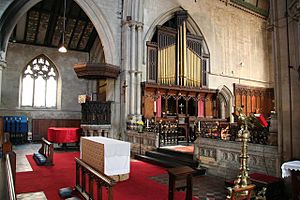 Details of the organ can be found on the National Pipe Organ Register.

A single bell of 3 cwt and 21 pounds was supplied in 1851, cast by Messrs Mears. It is currently described as unringable.

All content from Kiddle encyclopedia articles (including the article images and facts) can be freely used under Attribution-ShareAlike license, unless stated otherwise. Cite this article:
St Swithin's Church, Lincoln Facts for Kids. Kiddle Encyclopedia.