St Thomas Rest Park, located in West Street, Crows Nest, New South Wales is the site of the first cemetery on Sydney's North Shore. It is the largest park in the densely populated Crows Nest area. 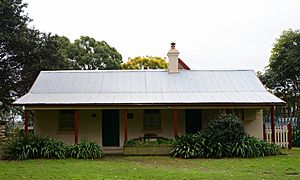 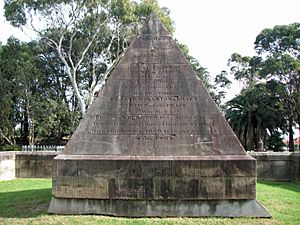 Tomb of Alexander Berry and his wife Elizabeth, plus Elizabeth's brother, Edward Wollstonecraft

The land that now contains the St Thomas' cemetery site was granted, in 1821, to Edward Wollstonecraft. The land for the cemetery was donated to the Anglican Parish of St Leonards in 1845 by the prominent landowner and merchant, Alexander Berry, whose wife Elizabeth had inherited it on the death of her brother Edward Wollstonecraft.

Wollstonecraft had died in 1832 and was buried in the Devonshire Street Cemetery. His remains were later moved to a tomb constructed in the St Thomas' Cemetery by Alexander Berry for his wife. Berry was also later entombed there. The tomb is still standing in the grounds of the Rest Park.

In 1967 the Cemetery was handed over to North Sydney Council by an Act of Parliament granting the area as 'community land' and allowing its conversion from a cemetery into a Rest Park. The new park opened in 1974. The sexton's cottage, dating from around 1850, was restored and opened as a museum in 1985. Many monuments and headstones are located within the sandstone-edged historic precincts while others are scattered around the Rest Park. An interpretive history trail provides 24-hour access to historical information.

All content from Kiddle encyclopedia articles (including the article images and facts) can be freely used under Attribution-ShareAlike license, unless stated otherwise. Cite this article:
St Thomas Rest Park Facts for Kids. Kiddle Encyclopedia.