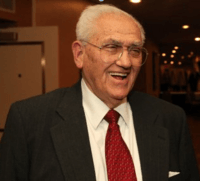 Stanley London (c. 1925 – June 8, 2020) was an American doctor. He worked with St. Louis Cardinal players from 1956 until his death. He was born in Springfield, Illinois. He became the team's senior medical adviser in October 1997. London was also team physician for the St. Louis Hawks for 11 seasons.

All content from Kiddle encyclopedia articles (including the article images and facts) can be freely used under Attribution-ShareAlike license, unless stated otherwise. Cite this article:
Stan London Facts for Kids. Kiddle Encyclopedia.