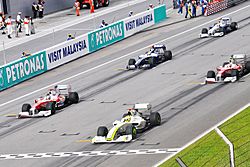 A standing start during the 2009 Malaysian Grand Prix.

A standing start is a type of start in auto racing events where cars are standing still when the race begins. In a standing start, cars are completely still when a green signal is given to start the race. This often follows a set of lights that count down to the start of the race. Standing starts are common in many motorsports, including drag racing, most single-seat (Formula One and GP2 Series), Touring Cars (most notably British and World Touring Cars), V8 Supercars, and many types of short-course off-road races. The standing start often occurs following a parade lap.

All content from Kiddle encyclopedia articles (including the article images and facts) can be freely used under Attribution-ShareAlike license, unless stated otherwise. Cite this article:
Standing start Facts for Kids. Kiddle Encyclopedia.