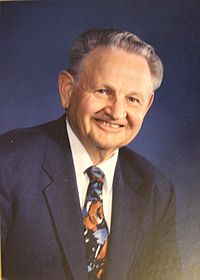 Schmidt was born on January 21, 1926, in Hollister, California, to Fred and Edith Schmidt. He married Meredith Hallenbeck in 1949.

From 1946 to 1961, Schmidt worked with NASA Ames Research Center, where he discovered the utility of the Kalman filter as applied to data processing for the nonlinear navigation equations of the Apollo manned lunar missions. While at Ames, he developed piloted motion simulators, designed nonlinear compensation techniques for saturation effects in control systems, and served as branch chief in charge of all analog simulation work. During 1961 and 1962, Schmidt was with Lockheed Missiles and Space Company, applying filter theory and model identification techniques and developing digital computer programs to process tracking data and give postflight evaluation of launch vehicle guidance and propulsion systems.

From 1962 to 1966, Schmidt was a senior staff scientist with Philco's Western Development Laboratory. There he directed studies of navigation and guidance systems for space vehicle systems and development of digital computer programs for analysis and design of space vehicle systems. Also at Philco, he conceived the fan beam navigation satellite technique and pursued studies to prove the feasibility and accuracy of this concept. He also developed a formulation of the Kalman filter which was named the Schmidt–Kalman filter in his honor.

All content from Kiddle encyclopedia articles (including the article images and facts) can be freely used under Attribution-ShareAlike license, unless stated otherwise. Cite this article:
Stanley F. Schmidt Facts for Kids. Kiddle Encyclopedia.