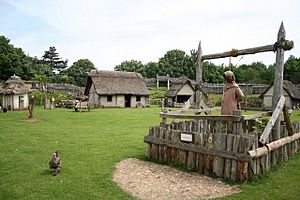 Reconstructed interior of the castle with free roaming chickens

The castle was built following the Norman conquest of England by the Mountfitchet family. It was constructed on high ground with a ringwork defence, enclosing around 0.5 acres (0.20 ha), and a bailey complex, enclosing 1 acre (0.40 ha) on slightly lower ground. Within the ringwork was a keep, within a small, round enclosure.

It is believed to have been an early Iron Age fort and Roman, Saxon and Viking settlement. Artefacts found on the site from these periods support this belief. In 1066 the site was attacked by the Normans and Robert Gernon built his castle here, making it his chief seat and the head of his Barony. Robert Gernon (or Robert Greno as he is referred to in the Domesday Book) came over from France with William the Conqueror, and was rewarded with this Lordship and several others in the County.The male line of the Gernon family continued for only five generations.

Mountfitchet Castle is a national Historic Monument, protected by the Department of the Environment. In the 1980s the castle was reconstructed as a tourist attraction.The grounds were cleared to reveal the original earthworks and mounds and after years of battling with planners, in 1980 the work began to reconstruct Mountfitchet Castle. After many years of work, the restoration of Mountfitchet Castle was complete and was opened to the public in 1985 and is unique as being the only wooden Motte and Bailey reconstruction on its original site anywhere in the world. Mountfitchet Castle and Norman Village as it is today enables the visitor to travel back in time to 1066 Norman England. A living history, hands-on and interactive experience.

In 2013, one of the castle's cockerels, a Light Brahma named 'Little John', was nominated for the world record for tallest chicken, standing at 66 centimetres tall.

All content from Kiddle encyclopedia articles (including the article images and facts) can be freely used under Attribution-ShareAlike license, unless stated otherwise. Cite this article:
Stansted Mountfitchet Castle Facts for Kids. Kiddle Encyclopedia.