Stantonbury Camp is the site of an Iron Age hill fort near Stanton Prior within the parish of Marksbury in Somerset, England. It is a Scheduled Ancient Monument. 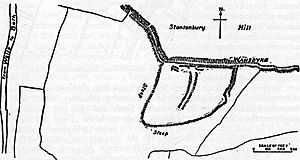 Plan of the camp

The hillfort, which is at the top of an isolated outcrop of Oolitic Limestone, close to the A39 road is on the route of the Wansdyke.

Several iron agricultural implements from the site, including blades of sickles or pruning hooks and the iron tip from an ard, now reside in the collection of the British Museum.

The site is on the English Heritage Heritage at Risk Register as being in danger of deterioration because of extensive animal burrowing.

All content from Kiddle encyclopedia articles (including the article images and facts) can be freely used under Attribution-ShareAlike license, unless stated otherwise. Cite this article:
Stantonbury Camp Facts for Kids. Kiddle Encyclopedia.