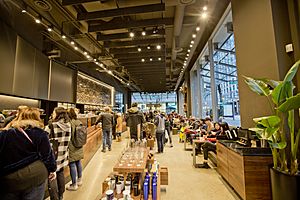 A Starbucks Reserve Bar in Vancouver

Starbucks Reserve includes three different types of locations: the "Starbucks Reserve Roastery", the "Reserve Bar", and the "Reserve Store". The roasteries, usually tens of thousands of square feet, are often described as a theme park experience, including coffee bars with tastings, cocktail bars, areas to observe the roasting and brewing processes, areas to purchase food, and local artwork throughout. The facilities also roast, package, and ship coffee to stores in their regions.

Reserve Bars are traditional Starbucks locations that sell some Starbucks Reserve products, supplied by a regional roastery. There are 43 locations, all of which include the regular Starbucks menu, and also have a coffee bar for a similar experience to the coffee bars in the roasteries.

Only one Reserve Store currently exists, in Seattle, on the first floor of the company's headquarters, the Starbucks Center. The store has a cocktail bar and marketplace, and sells similar coffee beverages to the Reserve bars and roasteries. 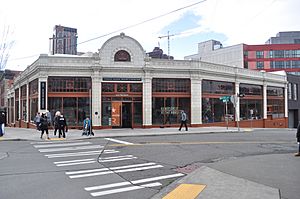 The first Starbucks Reserve roastery opened in December 2014 in the Capitol Hill neighborhood of Seattle. It has 15,000 square feet (1,400 m2) and is rumored to have cost about $20 million. The roastery includes a split-flap display, a departure board style common in 20th century railway stations. The board was created by Solari di Udine and displays the coffees being roasted. 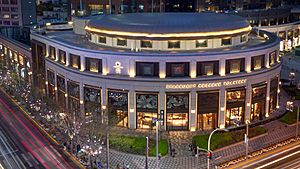 The roastery in Shanghai, China, is located in the HKRI Taikoo Hui mixed-use development, on the luxury shopping strip Nanjing Road. It opened in December 2017, and is currently the largest Starbucks location in the world (since surpassed by the Chicago roastery). The Shanghai roastery has 30,000 square feet (2,800 m2) between two stories. It is typically fully packed with customers, with lines out the door typical in peak times.

The Shanghai roastery has a roasting facility, three coffee bars, a Teavana tea bar, and an augmented reality feature designed by Alibaba: information about coffees and the roasting process viewable by opening the company's Taobao app and pointing it in different places. The store also includes a marketplace, a wine and beer tasting area, a bar for scooping bags of beans to purchase, and places to sample different coffees throughout the store. Similar to other roasteries, a two-story bronze cask sits at the center of the store. The cask is decorated with 1,000 traditional Chinese stamps, hand-engraved, telling stories of the company and coffee. The cask weighs 40 tons, and holds beans roasted in the facility, which are periodically dispersed through pipes around the facility for use. One of the roastery's coffee bars is 88 feet (27 m) long, the longest Starbucks coffee bar in existence. Similar to Seattle, the building also features an old-fashioned split-flap display board, showing which varieties are being roasted, and information about their flavors and origin. Many of the roastery's beans were grown in China's Yunnan province. The roastery also includes a Princi location, selling pizzas and focaccia. A coffee library includes books on the history of coffee, brewing methods, coffee art, and the history of Starbucks. The Teavana bar is popular due to China's traditional tea culture; the bar has a wide variety of teas, brewing methods, and tea-based drinks. 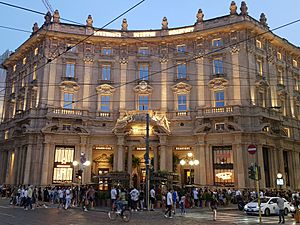 The roastery in Milan is located in the Palazzo Broggi [it], formerly the city's stock exchange and main post office building. The building sits in the Piazza Cordusio, a plaza in the center of the city. The roastery opened on September 7, 2018, becoming the first of any Starbucks in Italy, and the first and only roastery in Europe. It is the largest Starbucks in Europe, with 25,000 square feet (2,300 m2). The location was chosen as the city of Milan was where Howard Schultz visited in 1983, inspiring him to add espresso drinks to Starbucks, develop cafés, and create the coffeehouse chain out of the single original location.

The interior was designed considering its location. Most Starbucks locations utilize warm materials like wood, rather than stone surfaces. For the Milan location, an exception was made with the installation of Calacatta marble counters, due to marble's commonplace use in high-end Italian coffee shops. The counters have a radiant heating system to keep them warm.

The location has a main bar with seven different coffees, a self-service bean bar, a wood-fired oven bakery, a Princi foodservice area, a retail space, and an "Arriviamo" cocktail bar serving coffee-based cocktails and Italian drinks like the Aperol Spritz. The main bar has an affogato station, unique to the Milan location. The affogato ice cream is made to order with liquid nitrogen, served with an espresso shot. The coffee roasted in the building is used in Starbucks locations in Europe, the Middle East, and Africa.

The New York location is in Manhattan's neighborhood of Chelsea. It occupies the first floor of 61 Ninth Avenue. The location has 23,000 square feet (2,100 m2), and includes a coffee roastery, two coffee bars, a cocktail bar, bakery, and a terrarium. The bakery, operated by Princi, has baked goods, pizzas, salads, and breads. The cocktail bar, a branded "Arriviamo Bar", has coffee- and tea-based cocktails. The interior ceiling has artistic squares and rectangles resembling the building's exterior architecture. The terrarium resembles Hacienda Alsacia, a coffee farm in Costa Rica, and the first and only farm owned by Starbucks. 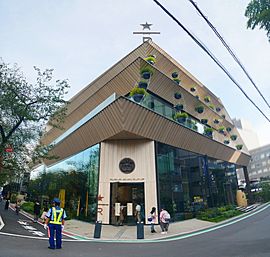 The Tokyo roastery opened in Tokyo's Nakameguro district on February 28, 2019. The roastery has about 32,000 square feet (3,000 m2), and was designed by Kengo Kuma and built with Japanese cedar. It is the only Reserve Roastery building purpose-built; the other roasteries repurposed existing buildings. The interior has four floors, each including decorative elements of Japanese culture. The first floor holds the main coffee bar, while the second floor holds a Teavana tea bar offering 18 different teas and tea-based beverages. The third-floor cocktail bar, branded a "Arriviamo Bar", has coffee- and tea-infused cocktails, Japanese versions of classic cocktails, and nonalcoholic cocktails. The fourth floor has the "Amu Inspiration Lounge", an event space planned to be certified as a training location by the Specialty Coffee Association of Japan.

Central to the space is a 56-foot-tall copper cask, made of 121 copper plates hand-hammered in the Japanese tsuchime technique. The cask holds roasted coffee beans, allowing them to settle and gas to escape before brewing or packaging. Around the cask are 2,100 copper cherry blossoms suspended from the ceiling, an homage to the nearby Meguro River, popular for its numerous blossoming cherry trees. Extending from the cask are copper pipes that deliver coffee beans across different areas of the store. The facility has two roasters, a 118-kilogram Probat G-120 and a 16-kilogram Probat P25 roaster, able to roast up to 4,000 pounds (1,800 kg) of coffee each day. The coffee is used in the roastery and shipped to retailers throughout Japan. 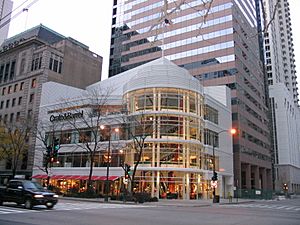 The Chicago roastery, which opened November 15, 2019, is the largest Starbucks location in the world. The building at 646 North Michigan Avenue on the Magnificent Mile has five stories at 35,000 square feet (3,300 m2). It was formerly a flagship store for Crate & Barrel. The roastery includes a coffee bar, cocktail bar, and Italian-style sandwich shop. Starbucks involved Crate & Barrel founder Gordon Segal and Solomon Cordwell Buenz, original architects of the building in 1990, in remodeling the space.

Inside the building are eight 56-foot-tall (17 m) copper tubes that transport coffee beans from floor to floor. Each floor has a theme and variety of delicacies. The first floor is the main floor for customers to grab coffee and treats to go, as well as souvenirs and merchandise. The second floor includes a Princi location selling pastries, fresh croissants, cannoli, cheesecakes, and other sweet tarts. Other foods like pastas and pizzas can also be found on the same floor. The third floor consists of barrels filled with Guatemalan cold brew and other rare coffees. The roastery's cocktail bar is on the fourth floor; it serves both classic and modern drinks. The fifth floor, the roof terrace, is currently unavailable until warmer seasons.

All content from Kiddle encyclopedia articles (including the article images and facts) can be freely used under Attribution-ShareAlike license, unless stated otherwise. Cite this article:
Starbucks Reserve Facts for Kids. Kiddle Encyclopedia.