Stargate is a 1994 science fiction movie.

In a dig at Giza in 1928, scientists find a big metalic ring inscribed with hieroglyphics. Archeologist Doctor Daniel Jackson is called by the US Air Force to translate hieroglyphics on the ring. They find out that the ring is actually a piece of alien technology that creates wormholes to transport people across the universe. A military team goes through the stargate with Jackson, and after the journey find out that they cannot get back to earth. They find a city of ancient Egyptian-like people under the rule of Ra, who is an alien posing as their god. They eventually kill Ra with a nuclear blast and figure out how to get back to earth, but Jackson gets married and stays on the planet. 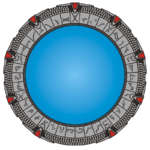 Drawing of the stargate from the movie

All content from Kiddle encyclopedia articles (including the article images and facts) can be freely used under Attribution-ShareAlike license, unless stated otherwise. Cite this article:
Stargate (movie) Facts for Kids. Kiddle Encyclopedia.