The State Dockyard was a ship building and maintenance facility operated by the Government of New South Wales in Carrington, Newcastle, New South Wales, Australia between 1942 and 1987.

In 1942, the State Dockyard opened on the site of the Government Dockyard at Dyke Point in Newcastle that had closed in 1933. Officially the New South Wales Government Engineering & Shipbuilding Undertaking, it was universally referred to as the State Dockyard. The dockyard facility was located at Carrington on Newcastle Harbour, on 11 ha (27 acres) of land in addition to the ship repairs site on 3 ha (7 acres).

The dockyard launched its first vessel in July 1943. By the end of World War II, it had launched two ships for the Royal Australian Navy and 22 vessels for the United States and had repaired six hundred ships.

With the cessation of large scale shipbuilding, in the 1970s it diversified into other engineering disciplines. In November 1986 a team of apprentices from the Hunter Valley Training Company completed a three-year overhaul of steam locomotive 3801 at the dockyard. The dockyard closed on 3 March 1987. 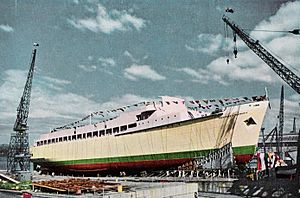 MS Princess of Tasmania under construction in 1958 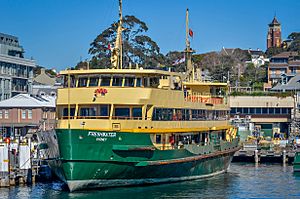 In 2007 the outline of the painted "STATE DOCKYARD" sign on southern roof of the former dockyard building could still be viewed from above.

As of 2014, the surviving State Dockyard built ships are Cape Don, a lighthouse tender built in 1962 for the Commonwealth Lighthouse Service which is now a museum ship at Balls Head Bay, Waverton. The ferries Lady Herron, Freshwater, Queenscliff, Narrabeen and Collaroy continue to operate for Harbour City Ferries, while former Sydney Harbour ferries Lady Cutler and Lady McKell operate as cruise boats on Port Phillip.

All content from Kiddle encyclopedia articles (including the article images and facts) can be freely used under Attribution-ShareAlike license, unless stated otherwise. Cite this article:
State Dockyard Facts for Kids. Kiddle Encyclopedia.