A statue of Christopher Columbus was installed in Richmond, Virginia in 1927, where it stood until 2020 when it was torn down by protestors in the wake of the killing of George Floyd and thrown into a nearby lake.

In 1925, Frank Realmuto (a Richmond barber) organized a campaign to donate a statue of Christopher Columbus to Richmond's Monument Avenue; this campaign was supported by Richmond's approximately 1,000 Italian-American residents. In May 1925, the Richmond City Council rejected a proposal to donate land for the statue alongside Monument Avenue on the basis that Columbus was both a foreigner and a Catholic; most of the council members believed that putting Columbus near monuments to revered Confederate figures would be inappropriate. This decision was widely criticized in newspaper editorials published across the United States, especially when it came to light that an opponent of the statue who spoke at the meeting was a member of a coalition that included the Ku Klux Klan. In June 1925, a committee of the Richmond city council decided to allocate land near Byrd Park for the statue. Fundraising began in February 1926 while Ferruccio Legnaioli, an Italian immigrant to Richmond, was selected to design the statue. Ground was broken in June 1926. 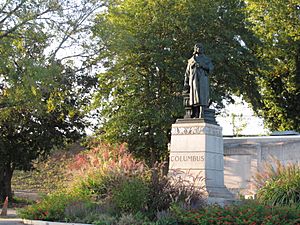 The statue was dedicated on December 9, 1927. Over 2,000 people attended the dedication despite near freezing temperatures. At the dedication, Virginia Governor Harry F. Byrd praised Italian dictator Benito Mussolini while Italian ambassador Giacomo de Martino claimed Italy sought peace. The ceremony concluded with de Martino pulling a cord to display an Italian and an American flag and the firing of a two-gun salute.

For decades, members Richmond's Italian-American community gathered near the statue on the eve of Columbus Day to celebrate Columbus and their culture. During the 2010s, the statue was repeatedly vandalized; these vandalizations coincided with increased opposition to Columbus Day and efforts to recognize indigenous peoples. On June 9, 2020, the statue was torn down, spray-painted, set on fire, and thrown into a nearby lake by individuals protesting the May 2020 killing of George Floyd. The protestors stated they were acting in solidarity with Native Americans; vandalism to the statue's base noted it was built on land belonging to the Powhatan. The statue was recovered from the lake on June 10 and taken away to be stored in a secure place.

All content from Kiddle encyclopedia articles (including the article images and facts) can be freely used under Attribution-ShareAlike license, unless stated otherwise. Cite this article:
Statue of Christopher Columbus (Richmond, Virginia) Facts for Kids. Kiddle Encyclopedia.