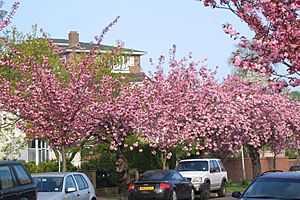 Staveley Road is a road in Chiswick in the London Borough of Hounslow which was the site of the first successful V-2 missile attack against Britain. 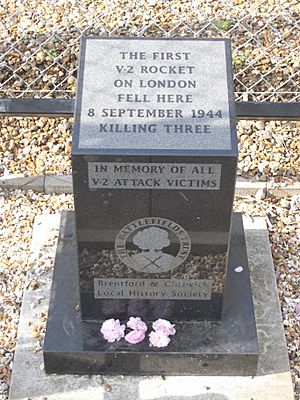 Staveley Road was built between 1927 and 1931 as part of the Chiswick Park Estate. On Friday 8 September 1944, a V-2 launched from Wassenaar in Holland landed in Staveley Road near the junction with Burlington Lane, killing three people (including a three-year-old girl), and injuring nineteen. The crater was thirty feet across.

Eleven houses were completely destroyed, and another fifteen had to be extensively rebuilt. The area at the time had been partly evacuated. The explosion could be heard six miles away in central London. Within an hour of the explosion, government officials were arriving at the scene. The general public was not notified about the existence of V-2 rockets until 10 November 1944.

All content from Kiddle encyclopedia articles (including the article images and facts) can be freely used under Attribution-ShareAlike license, unless stated otherwise. Cite this article:
Staveley Road Facts for Kids. Kiddle Encyclopedia.