Steinway Hall (1896–1970) was an 11-story office building, and ground-floor theater (later cinema), located at 64 E. Van Buren Street, Chicago, IL. The theater had at least 14 different names over the years, opening in 1896 as the Steinway Music Hall, and closing in the late 1960s as Capri Cinema. The building for a time in the early 1900s was the offices and nucleus of a group of famous Chicago architects that included a young Frank Lloyd Wright. These young architects, inspired by the Arts and Crafts Movement and the philosophies of Louis Sullivan, formed what would become known as the Prairie School.

Steinway Hall was an 11-story (then) skyscraper designed by Dwight H. Perkins and opened in 1896. The building was built by the piano makers Steinway & Sons and the theater was one of many Steinway Halls around the world designed to showcase company products.

Beginning in the winter of 1896-97, the building's 11th floor housed the offices of a group of important architects that included Dwight H. Perkins, Robert C. Spencer, Frank Lloyd Wright and Myron Hunt. Wright would maintain an office there until ca. 1908. The building and offices became a central location for architects including Webster Tomlinson, Irving Pond and Allen Bartlitt Pond, Adamo Boari, Walter Burley Griffin and Birch Long. The building served as the nucleus of a group of architects known as The Eighteen, a name coined by Wright to signify a group who gathered for meals to discuss matters of mutual interest. Others outside Steinway Hall who met with the group included Arthur Dean and George Dean, Hugh Garden, Arthur Heun, Alfred Hoyt Granger, Richard E. Schmidt and Howard Shaw.

Around 1925, the Chicago Musical College moved into the building. One hundred and twenty-five names appeared on the faculty roster for that year, and the School opened three dormitory floors for students. The College stayed there until 1954, when it merged with Roosevelt University's School of Music and moved operations to the Auditorium Building.

Steinway Hall was demolished in 1970. In its place, and all up along Wabash, was built the CNA Center (originally Continental Center III), 1970-72. This 44-story slab, designed by Graham, Anderson, Probst & White, is prominent in Chicago's skyline not only because of its 600-foot height close to Michigan Avenue, but even more so because of its redness. 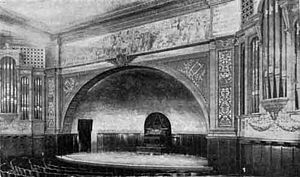 In 1930 it became a movie house called the Punch & Judy Theatre. In about 1931 it was renamed back to the Central Theatre and did live performances again, but in 1934 it went back to movies and was renamed the Sonotone Theatre. It was later renamed the Studio Theatre, the Ziegfeld Theatre, and finally the Capri Cinema in 1958. Capri Cinema ran adult films towards the end, closing in the late 60s. The theater was demolished with the building in 1970.

All content from Kiddle encyclopedia articles (including the article images and facts) can be freely used under Attribution-ShareAlike license, unless stated otherwise. Cite this article:
Steinway Hall (Chicago) Facts for Kids. Kiddle Encyclopedia.