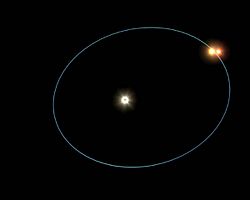 Artist's impression of the orbits of HD 188753, a triple star system

The Algol system as it appeared on 12 August 2009.Not an artistic representation, but a true two-dimensional image with 1/2 milli-arcsecond resolution in the near-infrared H-band.

Algol (β Persei) is a triple-star system (Algol A, B, and C) in the constellation Perseus. Algol A is eclipsed by the dimmer Algol B every 2.87 days. This animation was assembled from 55 images in the near-infrared H-band. Because some phases are poorly covered, B jumps at some points along its path.

A stellar system of two stars is known as a binary star, binary star system or physical double star. If there are no tidal effects, no disturbance from other forces, and no transfer of mass from one star to the other, such a system is stable. Both stars will orbit around the center of mass of the system indefinitely. Examples of binary systems are Sirius, Procyon and Cygnus X-1, the last of which probably consists of a star and a black hole.

It is possible to have star systems with more than two members. Their stars are gravitationally bound to each other, and may or may not be close to each other.

A recently discovered quintuple star system (five stars) is known as 1SWASP J093010.78+533859.5. The system has two sets of binary stars, one of them with a small third star. The two sets are a long way apart, further than the orbit of Pluto is to the Sun. The binary stars are close to each other and one binary has touching stars, with their outer ionised gases mixing. That situation is called a contact binary. From the data collected, the authors are fairly sure that both binaries (and probably all five stars) are gravitationally bound in a single system. The angles of inclination (the angle between the two orbital planes) of the two binaries (88.2(3) and 86(4) degrees). This suggests they originally formed by break-up (~9-10 billion years ago ago) from a single protostellar disk. Afterwards, they stayed in the same orbital plane.

Most multiple star systems are triple stars. Systems with four or more components are less likely to occur.

Multiple-star systems can be divided into two main types: systems which are stable, or systems with chaotic behavior. Chaotic ones are usually of young stars in systems not yet disrupted by chaos.

All content from Kiddle encyclopedia articles (including the article images and facts) can be freely used under Attribution-ShareAlike license, unless stated otherwise. Cite this article:
Star system Facts for Kids. Kiddle Encyclopedia.