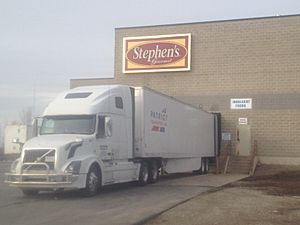 In the 1980s, Stephen Story experimented with different types of hot chocolate and gave them to his neighbors as Christmas gifts. In 1990, Story founded the company, originally called Stephen's Gourmet Kitchens. By 2000, Stephen's Gourmet composed 40% of the Utah market and sold in 48 states. In 2002, Indulgent Foods acquired the trademark for Stephen's Gourmet.

All content from Kiddle encyclopedia articles (including the article images and facts) can be freely used under Attribution-ShareAlike license, unless stated otherwise. Cite this article:
Stephen's Gourmet Facts for Kids. Kiddle Encyclopedia.