Fry sauce is a condiment often served with French fries or tostones (twice-fried plantain slices) in many places in the world. It is usually a combination of one part tomato ketchup and two parts mayonnaise. 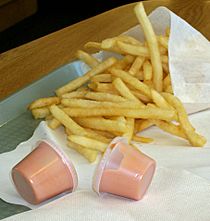 Although sauce composed of a mixture of equal parts ketchup and mayonnaise appears in a New Orleans cookbook published in 1900, fry sauce was originally popularized in the United States by a chef named Don Carlos Edwards, who served it in his first restaurant, Don Carlos’ Barbecue in Salt Lake City, which eventually became the Utah-based restaurant chain Arctic Circle in the 1950s. The chain still serves fry sauce in its western United States restaurants.

In Puerto Rico, mayoketchup is widely used with tostones, sandwiches, burgers, and fried foods. It is made of two parts ketchup and one part mayonnaise with the addition of garlic.

In April 2018, Heinz announced the release of "Mayochup", a mixture of the two sauces, because 500,000+ users voted "yes" in a Twitter poll asking Americans if they wanted to see it in stores. A number of Twitter users responded that such a mixture already existed as "fry sauce" and "fancy sauce". The sauce arrived at U.S. retailers' shelves in September 2018.

Several fast food chains have individually branded variants of fry sauce using a mayonnaise and ketchup base, including Zaxby's, Raising Cane's, and Freddy's.

The sauce is also closely related to Yum Yum sauce, which is popular in Japanese Steakhouses in America.[1] [2]

Outside the United States

In Argentina, Uruguay, Paraguay, Peru and Chile, a similar condiment known as salsa golf (golf sauce) is a popular dressing for fries, burgers, steak sandwiches, and seafood salads. According to tradition, the sauce was invented by Luis Federico Leloir, a Nobel laureate and restaurant patron, at a golf club in Mar del Plata, Argentina during the mid-1920s. In Spain and Colombia, it is known as salsa rosa or salsa rosada, a variant of cocktail sauce or Marie Rose sauce.

In France, many Turkish restaurants and fast food establishments serve fry sauce and call it sauce cocktail; it is also common for customers to request ketchup-mayo (a dab of mayonnaise and a dab of ketchup) alongside their French fries at such places. Both sauce cocktail and the thousand island-like sauce cocktail can often be found in supermarkets.

In Germany, a popular product called Rot Weiß (red white) is sold in toothpaste-style tubes; it consists of unmixed ketchup and mayonnaise, which form a red-and-white striped string when squeezed out. Fries at restaurants are sometimes served with an equal mixture of ketchup and mayonnaise. This style of serving is often called "Pommes Rot-Weiß" or, colloquially "Pommes Schranke" (barrier gate) due to the red white coloration of those. Pommes-Soße or Frittensoße (fry sauce) is a lightly spiced mayonnaise similar to the Dutch Fritessaus. A condiment similar to the American fry sauce is known as Cocktailsoße, but it is more often used for döner kebab than for French fries.

In the Philippines, a similar sauce is made by combining mayonnaise and banana ketchup. It is commonly used as a dipping sauce for fried food like french fries and cheese sticks (deep fried cheese wrapped in lumpia wrapper) but also for appetizers like lumpia.is:Kokkteilsósa

All content from Kiddle encyclopedia articles (including the article images and facts) can be freely used under Attribution-ShareAlike license, unless stated otherwise. Cite this article:
Fry sauce Facts for Kids. Kiddle Encyclopedia.