Stepney Meeting House was an independent church in Stepney, East London. It was founded in 1644 by Henry Barton and his wife, William Parker, John Odinsell, William Greenhill, and John Pococke, in the presence of Henry Burton, vicar at St Matthew Friday Street.

William Greenhill was the first minister, from its foundation until his death in 1671. He was succeeded by Matthew Mead. 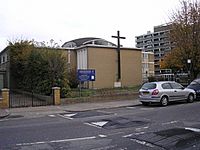 All content from Kiddle encyclopedia articles (including the article images and facts) can be freely used under Attribution-ShareAlike license, unless stated otherwise. Cite this article:
Stepney Meeting House Facts for Kids. Kiddle Encyclopedia.