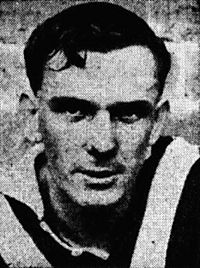 Stephen William Marsh (born 12 September 1924) is a former Australian rules footballer. He played for South Fremantle and East Fremantle in the West Australian National Football League (WANFL). His playing career lasted from 1945 to 1960. He is viewed as one of the best rovers of his era.

All content from Kiddle encyclopedia articles (including the article images and facts) can be freely used under Attribution-ShareAlike license, unless stated otherwise. Cite this article:
Steve Marsh (footballer) Facts for Kids. Kiddle Encyclopedia.