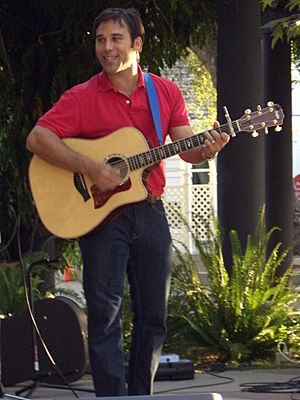 Steve Roslonek (born September 12, 1971) is an American children's music performer whose band SteveSongs has garnered several awards from parenting organizations, such as the Parents' Choice Award and the iParenting Media Awards. His music is featured on the Miss Lori and Hooper segments of PBS Kids Preschool Destination, where he appears as "Mr. Steve" and performs original songs between other programs.

Prior to his career as a recording artist, Roslonek graduated from Wesleyan University and performed with a professional a cappella group on Martha's Vineyard. After graduation, he worked as a business and technology consultant with Andersen Consulting. He began performing in 1997 and moved to a full-time recording career in 1999. He tours extensively around the country, performing between 200 and 400 concerts in a year.

Roslonek resides with his wife and children in Old Saybrook, Connecticut.

All content from Kiddle encyclopedia articles (including the article images and facts) can be freely used under Attribution-ShareAlike license, unless stated otherwise. Cite this article:
Steve Roslonek Facts for Kids. Kiddle Encyclopedia.