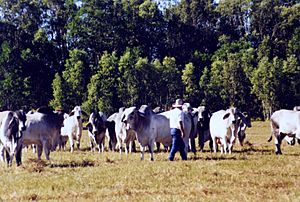 In Australia, a stockman is the name given to a person who looks after the livestock on large farms known as a station. Stations are owned by a grazier or a grazing company. A stockman can also be the persons employed at abattoirs, feedlots, on live export ships or with stock and station agencies.

People who work on station, including stockmen, are also known as “station hands”. Men learning how to become station managers are known as "jackaroos", while women are known as "jillaroos". Girls are often stockmen on farms. Some stations are now making it easier for women to work on stations by building female living quarters and putting in machinery to do some of the heavy work.

A related job is that of the drover, who, like the shearer may be an temporary seasonal worker. Drovers are employed in looking after the livestock while they are travelling on a stock route.

All content from Kiddle encyclopedia articles (including the article images and facts) can be freely used under Attribution-ShareAlike license, unless stated otherwise. Cite this article:
Stockman Facts for Kids. Kiddle Encyclopedia.